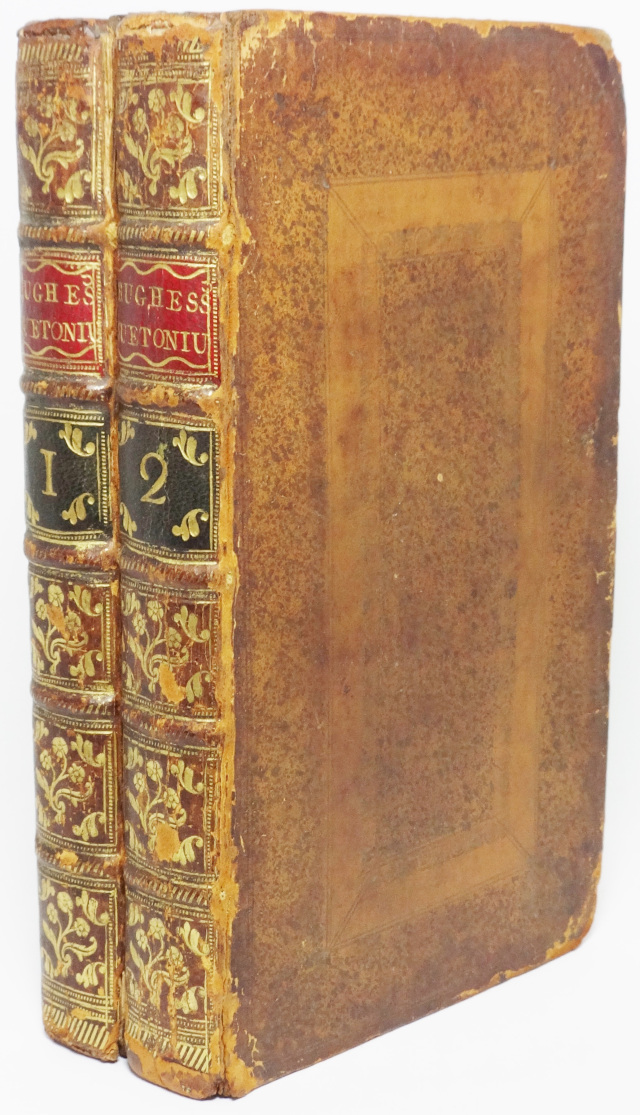 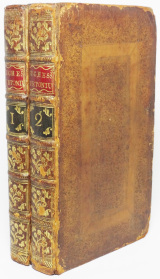 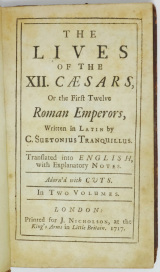 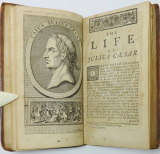 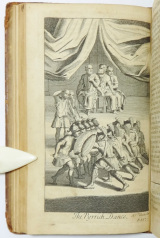 The Lives of the Twelve Caesars

Suetonius Tranquillus, C[aius ie. Gaius]; [Jabez Hughes, trans.]. THE LIVES OF THE XII CAESARS, or the First Twelve Roman Emperors . . . Translated into English, with Explanatory Notes [by Jabez Hughes]. London: Printed for J. Nicholson, 1717. Two volumes. 12mo (leaves approx. 16.5 x 9 cm). Continuously paginated: [32], 244 and [2], [245]-502, [18] pages, plus 16 full-page and 5 folding copper-engraved plates. Lacking the frontispiece. 18th-century full paneled calf with raised bands, red and black leather spine labels, and gilt floral decorations and filets on the spines. Worn with slight loss to the spine ends, corners rounded with boards showing, and some small scuffs to the spines and boards. Joints cracked on vol. I and started on vol. II, but all covers holding well. Endpapers and title pages foxed; light scattered foxing and mild tanning elsewhere. Offsetting from plates to neighboring pages and a little self-offsetting to some of the folding plates. One folding plate neatly repaired and reinforced on the verso with laid-paper with no loss; another with a little creasing due to misfolding. Small ink stains to the outer margin of the first page of the text with a slight impact on the headpiece; marginal ink stain to one page (II, p. 341) affecting one word of the chapter title. Still, a good set. Bookplate of Auchincruive, the estate of R.A. Oswald, Esq., on the front pastedown of each volume. Oswald's library was sold by Sotheby's in 1922.

First edition of the Jabez Hughes translation, with his lengthy preface and numerous footnotes. "The Lives of the XII Cæsars (1717), an annotated, illustrated duodecimo dedicated to John Duncombe, and reprinted in 1726, was the first eighteenth-century English version of Suetonius. . . . As the prefaces to his translations demonstrate, Hughes was a thoughtful classical scholar. In addition, he was discerningly well-read: echoes of Milton's blank verse, and the diction of John Philips, for example, and Dryden, may be heard in his work." --Oxford DNB.

Gaius Suetonius Tranquillus was a Roman historian active during the reigns of Trajan and Hadrian. He was a close friend of the younger Pliny, served for a time as Hadrian's private secretary, and had access to the imperial library. The Lives of the XII Caesars is the only of his many books to survive in near completeness (a few chapters have been lost, including material on Julius Caesar's youth prior to the age of 16). The work contains vivid portrayals of the emperors, with much on their public and personal excesses, and Suetonius includes a good deal of material on their reigns not found in other sources (particularly regarding Caligula).