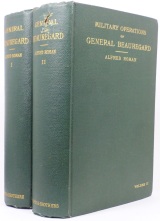 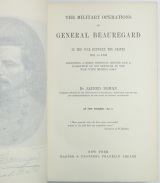 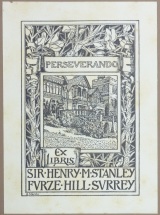 Roman, Alfred. THE MILITARY OPERATIONS OF GENERAL BEAUREGARD in the War Between the States, 1861 to 1865. Including a Brief Personal Sketch and a Narrative of His Services in the War with Mexico, 1846-8. New York: Harper & Brothers, [c.r. 1883; printed circa 1884]. Two volumes. xvii, 594 and xvi, 691 pages, plus frontispiece portrait in each volume, one full-page plate (Fort Sumter before and after the war), and one full-page map (defenses of Charleston and its harbor). 12-page publisher's catalog at the rear of vol. II. Original dark green pebbled cloth lettered in gilt; top edges gilt; light brown-coated endpapers. 23 x 16 cm. Small gouge affecting two letters on the spine of vol. II, else very good or better. Faint stain along the edge of the front cover of vol. II; minuscule scuff to the lower corner of the same cover; some minor rubbing to the extremities of both volumes. Tiny nick to the fore-edge of vol. I. Slight foxing to endpapers and a few minor traces elsewhere. Several leaves creased by an early reader (Stanley?). Still, an attractive set with bright covers.

Provenance: From the library of the famous explorer, Henry Morton Stanley, who served under Beauregard at Shiloh, with his pictorial bookplate on the front pastedown of each volume. Before finding Livingstone and gaining international renown for his African adventures, Stanley (1841-1904) fought for both sides during the Civil War. He emigrated from Wales to the United States at the age of 18, worked for a time in New Orleans, and was living in Arkansas when the fighting started. In the summer of 1861, he volunteered for "The Dixie Grays," which enrolled as Co. E. of the 6th Arkansas Infantry. He saw little action until Shiloh, but that battle opened his eyes to the horrors of war, as is vividly recounted in his Autobiography. Stanley participated in heavy fighting on the first day of the battle but was captured the following day and was afterward imprisoned at Camp Douglas. He gained his release by swearing allegiance to the Union and joining the Federal army in June 1862, but he was soon discharged due to a severe case of dysentery and he saw no more fighting as an infantryman. After serving on merchant vessels for a time, he returned to the war in July 1864 by joining the Union navy. He was a clerk on the U.S.S. Minnesota and served during the bombardment of Fort Fisher. He deserted his ship at Portsmouth in Feb. 1865, ending his American military service. Stanley had an exalted opinion of Beauregard while serving in the Confederate Army, but he later lamented his youthful enthusiasm. Reflecting on Beauregard at the time of the general's death in 1893, Stanley wrote: "His achievements were not those of a military genius, and genius alone deserves such unmeasured praise as we gave him." --The Autobiography of Sir Henry Morton Stanley, p. 445. Stanley specifically criticized Beauregard and Johnston for throwing their tired, hungry, and wet men against Grant's "rested and well-fed troops" at Shiloh (ibid., p. 186). Furthermore, he came to regret his own decision to enlist, calling it a "grave blunder" (ibid., p. 167). Stanley's handsome bookplates, designed by A. Marchi, depict his Surrey estate, Furze Hill, where he resided from 1899 until his death a few years later. After he passed, Stanley's wife edited and published his memoirs. She utilized Roman’s work while reviewing the Civil War chapters and quoted his book in a footnote on Shiloh (Autobiography, p. 187).

Early printing, following the first of 1884. While hardly objective (it is commonly believed that Beauregard wrote much of the book himself), this detailed military study is an indispensable source for understanding Beauregard and the various Confederate forces he commanded. "Where the writing was not literally Beauregard's, Roman used the general's notes to compose presentable prose. The result is a work with an agenda that is heavily slanted yet fascinating. The biography reflects the vibrance of a writer who was on the spot -- Roman was Beauregard's aide-de-camp and inspector general. . . . A valuable source on the first victor of the Confederacy." –Eicher, The Civil War in Books, 186. Nevins, CWB II, 86. Dornbusch II, 2605.