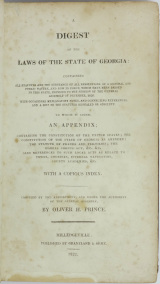 Prince, Oliver H[illhouse], comp. A DIGEST OF THE LAWS OF THE STATE OF GEORGIA: Containing All Statutes and the Substance of All Resolutions of a General and Public Nature, and Now in Force, which have been Passed in this State, Previous to the Session of the General Assembly of December, 1820. With Occasional Explanatory Notes, and Connecting References, and a List of the Statutes Repealed or Obsolete. To which is Added, an Appendix; Containing the Constitution of the United States; the Constitution of the State of Georgia as Amended; the Statute of Frauds and Perjuries; the Habeas Corpus Act, &c. &c. Also References to Such Local Acts as Relate to Towns, Counties, Internal Navigation, County Academies, &c. With a Copious Index. Milledgeville, [Ga.]: Grantland & Orme, [printed by J. & J. Harper, New York], 1822. 8vo (in fours). Leaves approx. 23 x 14 cm. xiii, [3], [17]-669 pages, including half-title. Contemporary calf with black leather spine label, recently rebacked with the original spine laid down. Some wear, stains, and small scrapes to the leather. Light stains to the front endpapers. Moderate foxing and toning throughout with occasional darker spots, in no place affecting legibility; light damping to the lower margins. Early manuscript correction on p. 231 with an associated small ink blot affecting several words of text that are legible upon close examination. Still, a good copy.

Provenance: Bookplate of Rev. James Stacy of Newnan, Georgia on the front pastedown, and with his name in pencil on the front free endpaper. James Stacy (1830-1912) was minister of the Newnan Presbyterian Church (1857-1900), president of the Board of Trustees of Columbia Theological Seminary, and the author of several books, including the posthumously published, History of the Presbyterian Church in Georgia (1912).

FIRST EDITION. "The first legal classic authored by a Georgian." -- New Georgia Encyclopedia. Prince's "Digest" was the standard reference for the laws of Georgia for nearly three decades following its initial publication and remains a significant historical resource. A second edition was issued posthumously in 1837.

Oliver Hillhouse Prince (1782-1837) was a prominent attorney, newspaper editor, and legislator. He served as U.S. Senator from Georgia in 1828-1829, completing the term of Thomas W. Cobb, who had resigned. From 1832 to 1835, he was the proprietor and editor of the influential newspaper, the Georgia Journal. He was also the president of the first railroad convention in Georgia (1831) and served as a director of the Georgia Railroad Company. In 1837, he traveled to New York to arrange for the publication of the second edition of his digest. On his return voyage, he was killed when his ship, the S.S. Home, foundered in the Outer Banks during the great hurricane, the “Racer's Storm.” De Renne, Catalogue of the Wymberley Jones De Renne Georgia Library, I:382. Cohen, Bibliography of Early American Law II, 5641. Sabin 27038. American Imprints 8813.