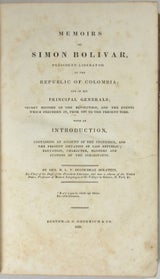 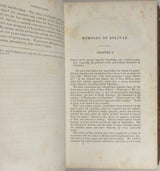 Holstein, H.L.V. Ducoudray. MEMOIRS OF SIMON BOLIVAR, PRESIDENT LIBERATOR OF THE REPUBLIC OF COLUMBIA; and of His Principal Generals; Secret History of the Revolution, and the Events which Preceded it, from 1807 to the Present Time. With an Introduction, Containing an Account of the Statistics, and the Present Situation of said Republic; Education, Character, Manners and Customs of the Inhabitants. Boston: S.G. Goodrich, [Waitt & Dow Printers], 1829. 8vo. Leaves measure approx. 23 x 13.5 cm. 383 pages. Contemporary full sheep decorated in gilt on the spine; all edges stained yellow. Very good. Spine ends and joints rubbed; corners worn; light scuffing to the covers; edges soiled. Light scattered foxing; several leaves with corner creases.

FIRST EDITION. Precedes the London edition of the following year. Henri Louis La Fayette Villaume Ducoudray Holstein (1763-1839) was a native of Prussia, who fought under Napoleon before serving on Bolívar’s staff from 1814 to 1816. As an eyewitness account of Bolívar's fight for independence, the work is of obvious significance, and it had a wide impact. It was one of the earliest and most commonly available accounts of Bolívar in the United States, and its influence was perpetuated when Karl Marx used it as the basis for his entry on Bolívar in the “New American Cyclopaedia“ in 1858. However, Holstein was harshly critical of Bolívar, attacking both his military leadership and his pursuit of women, and the book was evidently written to undermine Bolívar's reputation in the United States. Contemporaries and historians alike have condemned the author for his lack of objectivity. According to Peru de Lacroix, a French officer who served with Bolívar after Holstein’s departure, Bolívar himself had little respect for Holstein, and he repudiated the claim that Holstein had been his chief of staff (a claim asserted on the title page of the present volume).

After leaving South America, Holstein settled in upstate New York, became a professor at Geneva College, edited a newspaper (“The Zodiac“), and published several books. One of his later works was a biography of the Marquis de Lafayette, who Holstein helped free from imprisonment at Olmütz. Ref. Conn, “Bolívar’s Afterlife in the Americas“, p. 158, et passim, and Wiki.