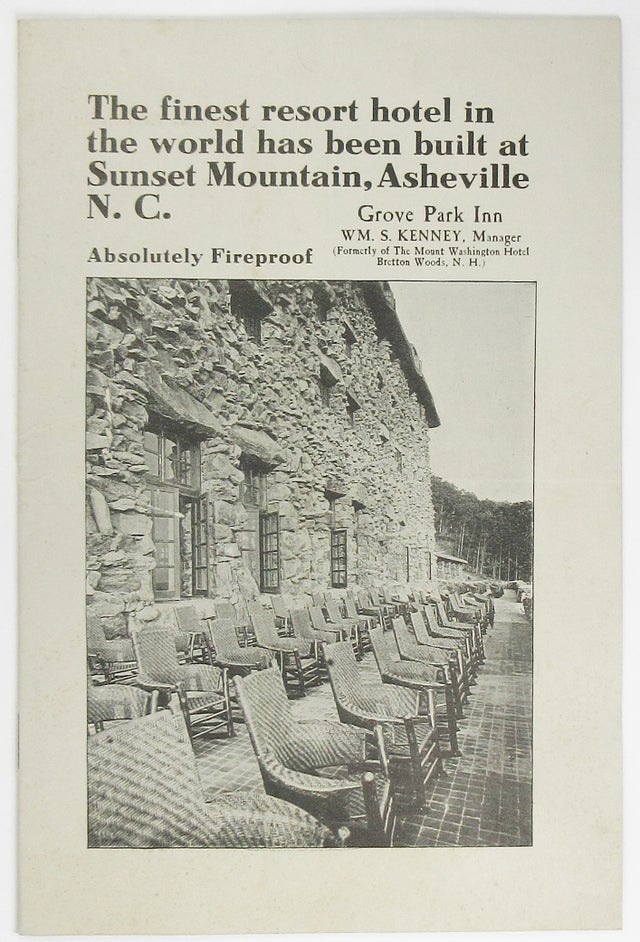 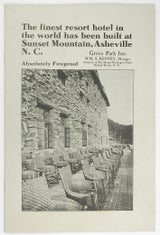 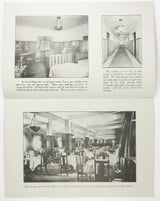 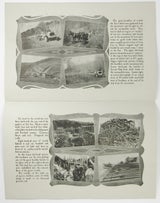 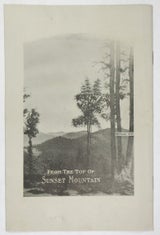 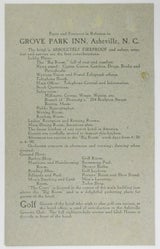 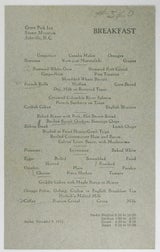 Grove Park Inn. The Finest Resort Hotel in the World has Just Been Built at Sunset Mountain, Asheville, N.C. Grove Park Inn, Wm. S. Kenney, Manager . . . Absolutely Fireproof. [Caption title on front wrap.] [n.p., Asheville? New York? Printed circa 1913.] Unpaginated. [14] pages. Illustrated from photographs throughout. Original self-wraps, stapled as issued. 23.5 x 15.5 cm. A tear to the front wrap (approx. 5 cm) is fairly inconspicuous as it occurs on the portion of the photograph showing the jagged rock face of the hotel; marginal pinholes to rear wrap; else near fine with a faint horizontal fold throughout.

Apparent first edition thus. One of the first separately printed advertisements for this famous Appalachian resort. It was likely issued in 1913, the year after the Grove Park Inn opened, based on textual clues ("just built" on the cover; a quote from the December 1912 issue of Golf magazine; several photos of the hotel under construction) and the fact that it was found in an album (now perished) with a hotel menu dated in that year. It was preceded by a promotional pamphlet issued before the hotel opened with a similar title advertising that the Grove Park Inn "is being built" (OCLC finds only three copies thus, at Duke, UNC, and Wake).

The text of the pamphlet describes the features of the landmark hotel, including furniture and fixtures made by the Roycrofters. Photographs depict the grand lobby, guest rooms, dining room, the outdoor terrace, and nearby hiking trails, and the center spread features a double-page view of the golf course.

An announcement at the base of the first page notes that the pamphlet was issued for the use of the "New York Booking Office, 1180 Broadway," which indicates the national nature of the resort's advertising campaign and perhaps provides a clue to the place of publication. OCLC finds only one copy with the title as it appears here (Appalachian State), but another six copies are listed with the same short title and correspond in size and pagination. Many similar but apparently later incarnations of the brochure are found, with the phrase "open all year round" added to the "absolutely fireproof" statement on the front cover (amongst other changes). See Thornton 5376.

On the verso there are printed “Facts and Features in Relation to Grove Park Inn, Asheville, N.C.”