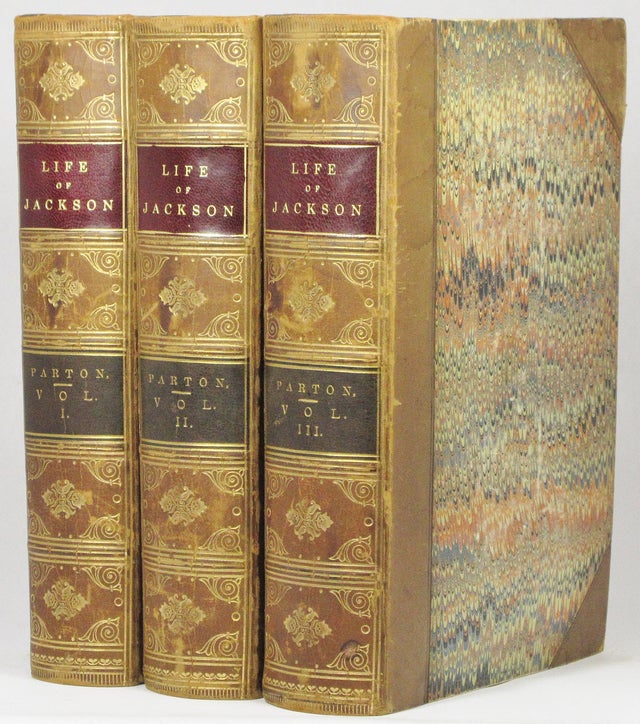 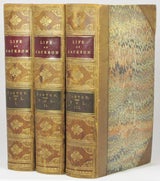 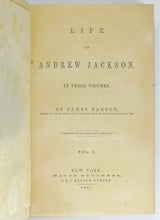 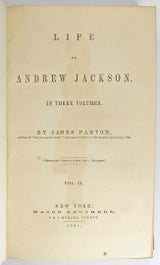 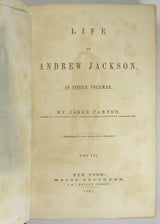 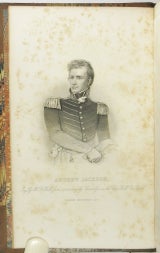 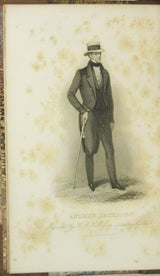 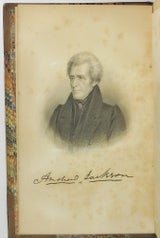 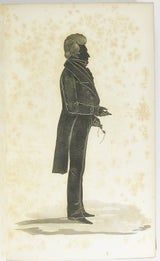 Parton, James. LIFE OF ANDREW JACKSON. New York: Mason Brothers, 1861. Three volumes. xxx, [2], [29]-636; 672; and 734 pages, plus engraved frontispiece portrait in each volume and additional silhouette frontispiece in vol. II. 19th century half calf over marbled boards with leather labels and gilt panels on spines; endpapers and all edges marbled. The title labels on the spine are sympathetic and nicely executed replacements. Light wear to the extremities, a few small stains to the spines. Moderate foxing to the plates, first and last few leaves of the first volume are tanned, two leaves with marginal tears not affecting the text. Thus, a bit short of very good, but still a solid, attractive set.

Tasteful armorial bookplate of Augustus Emerson Babcock (1863-1949) on each front pastedown. Babcock was a local government official and genealogist from Brighton, New York, and the author of Isaiah Babcock, Sr., and His Descendants (1903). A friend of Teddy Roosevelt, he was a candidate for Congress in 1912 on the Bull Moose ticket and a delegate to the Progressive Party national convention the same year.

Second printing of the first edition, following the first of the previous year. The greatest work of the most prominent American biographer of the 19th century, and still a standard reference. Based on thorough research, involving widespread travel and interviews with numerous acquaintances of  Jackson, the book was both a critical and commercial success. Parton provides an extensive bibliography at the beginning of the first volume.

"Parton’s most important work was his three-volume biography, the Life of Andrew Jackson, which was recognized by contemporaries as a major literary accomplishment and earned him a high rank among American writers of the nineteenth century. Virtually every other biographer of Andrew Jackson has relied to some extent on Parton’s work, making it one of enduring value. Parton conducted interviews with dozens of persons who had known the seventh president. Like other writers of his era, Parton sometimes did not digest all of his research and, according to the style of the time, inserted whole letters or lengthy quotations from speeches, documents, and newspaper articles. Some of the originals of these materials were later lost or destroyed, giving greater importance to the block quotations in Parton’s books. Parton found much to criticize about Jackson, whom he blamed for the spoils system and considered 'unfit for the office' of president. Parton delineated and discussed Jackson’s personality traits, military campaigns, and political career, providing a detailed narrative of a colorful life." --Joseph G. Dawson in ANB.

"Still of great value . . . Written by the finest of the 19th-century American biographers, this was the first substantial biography of Jackson. Parton's work is particularly good for the early period. It is less objective and more sharply critical of his later life." --Smith, Tennessee History: A Bibliography, pp. 31(n) and 74.