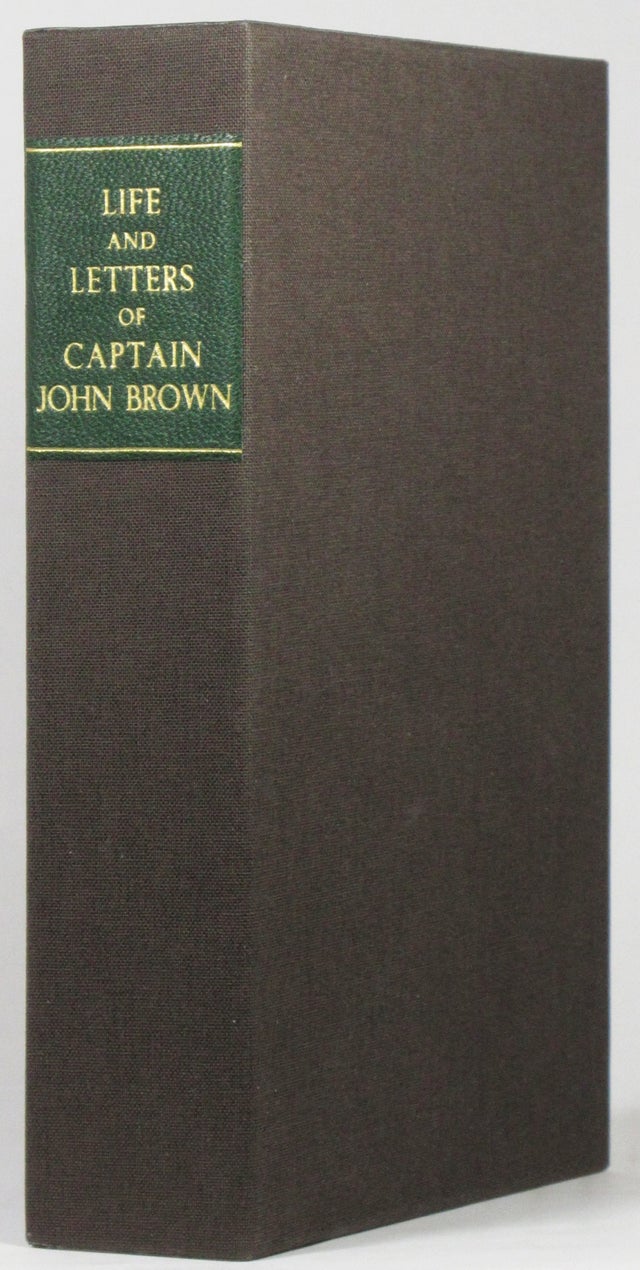 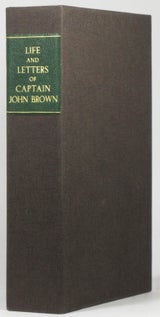 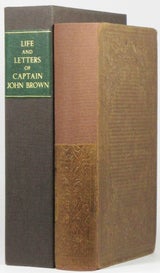 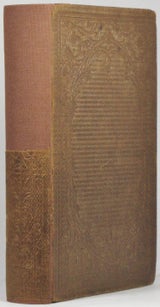 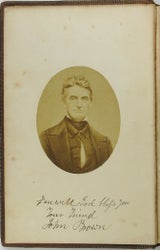 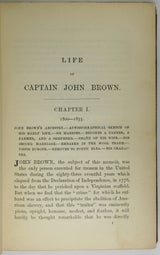 [Brown, John.] Richard D[avis] Webb, ed. THE LIFE AND LETTERS OF CAPTAIN JOHN BROWN, who was Executed at Charlestown, Virginia, Dec. 2, 1859, for an Armed Attack upon American Slavery. With Notices of Some of His Confederates. London: Smith, Elder, and Co., [printed by Alfred Webb, Dublin], 1861. xiv, 453 pages, plus frontispiece portrait, being a mounted original albumen photograph of John Brown. Original embossed brown cloth. 17 x 12 cm. Professionally rebacked in brown cloth with the lower half of original spine laid down; original endpapers retained. Tiny marginal chip to one leaf of the table of contents and tiny tears to another, in neither case approaching the text, else very good. Minor marginal foxing to the frontispiece, not affecting the photograph; faint foxing to the title page and a few scattered spots elsewhere, but a clean copy overall. House in custom-made cloth slipcase with gilt-lettered green morocco spine label. Early bookseller's ticket (John Mowat, Dublin) on rear pastedown. Signature of Edward K. Dunham on front free endpaper, dated 1883. This was perhaps Edward Kellogg Dunham (1860-1922), a Harvard-trained pathologist from New York.

FIRST EDITION. One of the earliest biographies of the legendary abolitionist, this volume is particularly valuable for reproducing many letters by Brown, including a chapter devoted to his correspondence in prison while he awaited his execution. There are also remembrances of Brown by Ralph Waldo Emerson, Theodore Parker, William Lloyd Garrison, and Wendell Phillips. The superb frontispiece photograph of Brown depicts him without his now famous beard, which he only grew a year or two before the raid on Harper’s Ferry to disguise himself as his plans for rebellion advanced.

The editor, Richard Davis Webb (1805-1872), a Quaker printer and publisher from Dublin, was one of the most vocal of the Irish abolitionists. He co-founded the Hibernian Antislavery Association in 1837 and helped establish the Anti-Slavery League in 1846. He was closely allied with the movement in the United States and developed a warm friendship with William Lloyd Garrison.

“Webb was a vital link between European and American activists. He helped to organize many of the visits of American lecturers to Britain and Ireland, and his voluminous correspondence with Garrison and others is a valuable source of information for historians.”–Dictionary of Irish Biography. He was also the publisher of the Irish edition of Frederick Douglass’s first autobiography, Narrative of the Life of Frederick Douglass, an American Slave (1845). While the present volume was distributed by a London publisher, it was printed at Webb’s firm in Dublin by his son, Alfred, who later became a leading Irish nationalist and member of Parliament.